From street lighting control, through smart metering to geofencing, we are committed to providing the highest performance wireless mesh network solutions for today’s advanced lighting control and IoT challenges

You are here: Home / Products / Technology

A New Way of Thinking

The era of the Internet of Things is upon us. Its demand for robust, secure and simple to deploy solutions, is not well met by the existing networks. Current wireless protocols, deeply rooted in legacy wired data-communication paradigms, are far from optimal for the modern IoT and M2M wireless connectivity.

The technology behind VEmesh™ sets to change all that. As it turns out, a wireless network node does not need to account for who its neighbors are in order to propagate messages throughout a mesh network. More so, the node itself does not require an ID or address for wireless networking. By utilizing synchronized-flooding, the message propagation methodology developed by Virtual Extension for use in VEmesh results in networks becoming more robust. Also latency is decreased, deployments are simplified, energy-efficiency is inherent, and the resulting bi-directional network becomes fully transparent to the data flowing through and the application at hand.

The VEmesh technology has been adopted in IEC 62386-104 standard, also known as Wireless DALI. It is the only technology there to operate in the high range and robust sub-1GHz frequency range.

VEmesh uses a low bit rate, highly synchronized, TDMA, bi-directional communication scheme that operates in the license-free ISM bands. Its key advantages stem from the use of synchronized-flooding rather than routing or simple flooding. 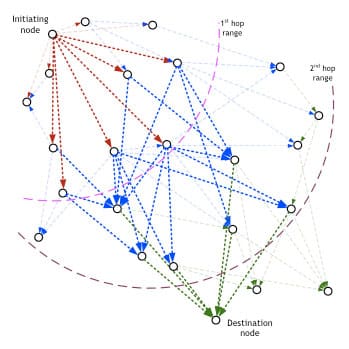 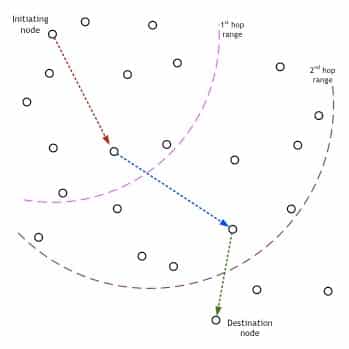 In a synchronized-flooding network, when an initiating node transmits, all neighbors who are within the physical vicinity and who received the transmission will repeat it in unison during the following hop. The synchronized transmissions coming from different nodes in space act as a choir of nodes, thus increasing the resiliency and range of the reception. The nodes who heard the choir in the previous hop will themselves repeat the transmission as a second choir in the subsequent hop. This process continues until the network reaches the set number of maximum hops and the message has flooded through the network, having utilized all possible RF propagation paths in the process.

Additionally, the VEmesh network changes frequency with each hop, thus attaining an inherent frequency diversity alongside the space diversity provided by synchronized-flooding propagation. Frequency and space diversity together allow VEmesh the ability to overcome both physical obstacles and radio interference.

Unique to VEmesh and fulfilling IoT today’s needs, the network becomes more robust as additional nodes are added. As more nodes are deployed, a greater number of simultaneous paths is available during message propagation. Furthermore, there is no limit as to the number of nodes supported per network.

Synchronized-flooding also provides the ultimate freedom in node mobility – yet an additional IoT requirement. Because nodes never account for who their neighbors are, they can move freely while maintaining the full capacity and benefit of the VEmesh network.

Synchronization provides another key benefit: energy-savings. Because the entire network is synchronized, each node opens its transceiver only when a transmission is in the air, allowing it to idle in a low-power state for a majority of its lifetime. This translates to fully functional bi-directional VEmesh networks capable of battery operation for 10 or more years.

Lastly, the VEmesh networking stack is highly efficient in both performance and codebase. Weighing in at less than 8K of code, it allows Virtual Extension the use of simple, low-memory, low-power microcontrollers in its modules and chipsets, resulting in a wireless mesh network solution that is highly cost effective.

Please check our resources’ page for a white paper explaining the technology, or contact us for any other questions.